Ingesan, doubly awarded for its commitment to the labor market insertion of disadvantaged groups

Ingesan, the leading subsidiary of OHLA’s Services line, has obtained two new awards for its commitment to the creation of socially responsible employment. The company has been awarded a diploma from Fundació Intermedia for hiring people in vulnerable situations and for participating in sessions to learn about the productive environment to promote job placement.

It has also received a special mention in the framework of the “Incorpora Tarragona” program of Obra Social La Caixa, for hiring people at risk of social exclusion.

For years, OHLA and its subsidiary Ingesan have been committed to job creation with equal opportunities, promoting insertion programs and supporting people who have difficulties in accessing the labor market. This commitment has resulted in the hiring of more than 700 people from vulnerable groups and has also earned the company the recognition of the Integra Foundation as a socially committed company. Most of these hires have benefited women victims of gender violence, in accordance with Ingesan’s express commitment to this group, which is continuously reflected in its equality plans.

In addition to these awards, Cruz Roja Granada, Cruz Roja Huelva and Cruz Roja Sevilla were also recognized for their work in the integration of women and other groups at risk of social exclusion. The company has also received the Làbora Seal distinction, awarded by the city of Barcelona. 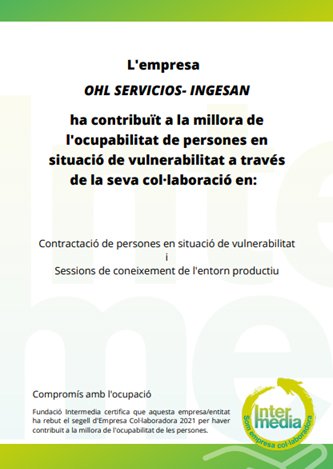