THE COMPANY, WHICH HAS BEEN BUILDING HEALTHCARE INFRASTRUCTURES FOR ALMOST 100 YEARS, HAS CARRIED OUT NEARLY 500 PROJECTS ON FOUR CONTINENTS

Since the beginning of its activity in the hospital field, OHLA has carried out important construction and refurbishment projects for healthcare centers on four continents. These include works such as the Curicó Hospital (Chile), the National Forensic Mental Health Hospital in Portrane, north of Dublin (Ireland), the renovation and expansion project of the South Miami Hospital in Florida (USA) and the Burgos Hospital (Spain).

In Spain, the company has just been awarded the project for the renovation and expansion of the Manacor Hospital, with a budget of almost 59 million euros, promoted by the Balearic Islands Health Service (IB Salut).

The awarded works consist of the construction of a new building with a built area of 21,272 m2, distributed in four floors above ground where the new ambulatory services will be located and two basement floors that will house a parking lot with capacity for 280 vehicles. The new 2,765 m2 industrial building will also be built on two floors, one above ground, where the kitchen, central facilities, maintenance and general services will be located. The connection with the existing building will be made through a subway gallery. 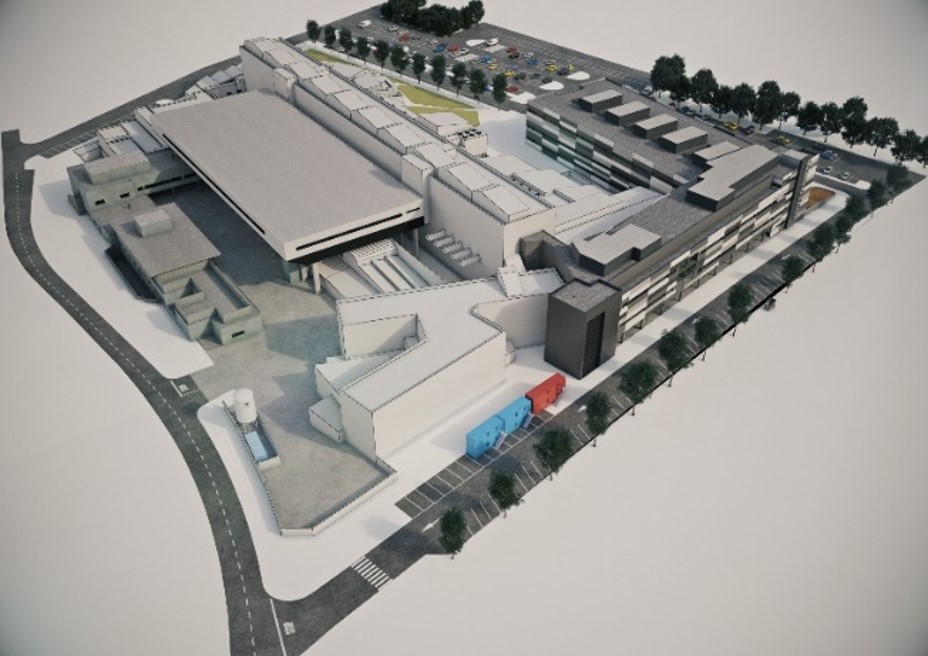 Infographics of the expansion and refurbishment project of the Manacor Hospital. Balearic Islands, Spain.

As for the refurbishment, it is worth mentioning the enlargement of the surgical block, with a surface area of more than 4,500 m2, through the construction of an independent structure over the current operating rooms. This new area will be equipped with 7 operating rooms, a resuscitation unit with 14 beds, an intensive care unit with 12 boxes, as well as offices and staff work areas. It also includes a new technical mezzanine between the two surgical areas. Once the expansion of the surgical block has been completed, following the transfer of the activity, the entire former surgical and obstetric block located on the second floor will be completely remodeled, covering an area of more than 9,000 m2. On the first floor, the current kitchen and sterilization areas will be intervened. Finally, work is also planned for the management building.

It should be noted that all the actions will be carried out while maintaining the healthcare activity.

Active projects in Europe, the U.S. and Latin America

The awarding of this project is in addition to other initiatives currently underway in Spain, such as the renovation of the Neonatology and pediatric ICU at the Hospital Universitario La Paz (Madrid); the expansion and renovation of the Hospital de Viladecans; the construction of the new hospitals of Ontinyent and Cuenca, and the expansion and renovation of the Albacete University Hospital Complex. In Chile, OHLA has been awarded the construction and maintenance of four hospitals in the Biobío region and, in Peru, the company is building the new Sullana Hospital and the Pósope Alto Health Center, with 4,500 m2 of facilities, which will serve more than 62,000 inhabitants of the Patapo district.

OHLA’s activity in the hospital field began in 1930 in Spain and has been extended to other countries. In total, the company has carried out the construction of more than 150 new hospitals, equivalent to more than six million square meters and more than 60,000 beds. In addition to these figures, the company has completed around one hundred healthcare centers and more than 200 renovation and rehabilitation projects. It should be noted that the company applies in its work methodologies such as BIM (Building Information Modeling), aligned with the digitalization of construction processes, and follows sustainability criteria recognized by prestigious international standards, such as LEED (Leadership in Energy & Environmental Design) certification, awarded by the US Green Building Council.