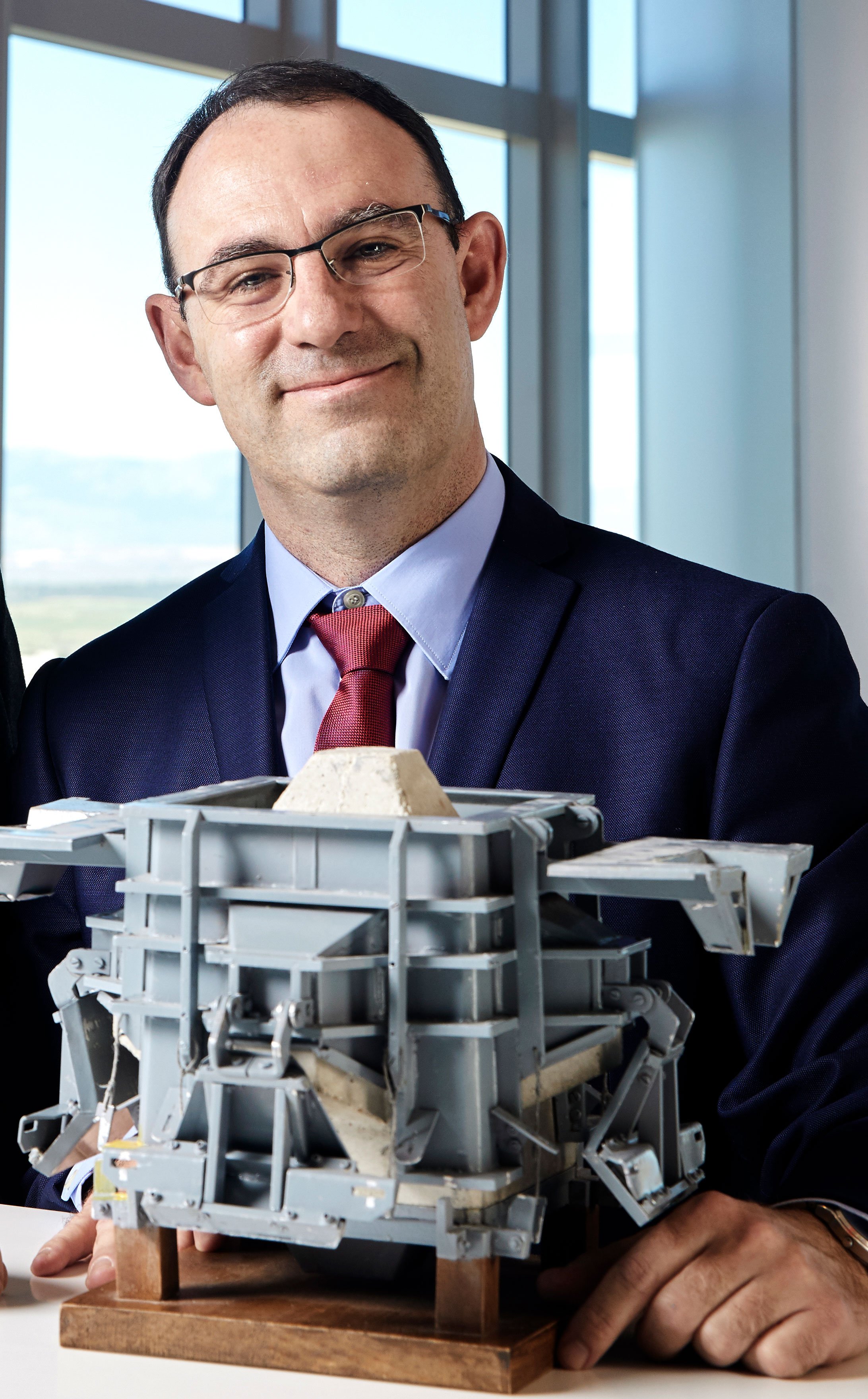 More than twenty years ago, Antonio Corredor started working at SATO, a subsidiary of OHL specialized in maritime and port works. Since then, this civil engineer has focused his professional career in the areas of site assistance, engineering supervision and solution development. Together with Carlos Fermín Menéndez, who held the position of workshop manager and supervisor in this subsidiary, he has been nominated by the European Patent Office for the European Inventor Award 2019, for developing the concrete mold known as the Cubipod, a technological innovation used in the construction of embankment dam protection mantles. Its use favors greater protection of the coastline and its manufacture and handling means cost savings.

1. When you were nominated for the European Inventor Award 2019, what was your reaction?

My first reaction was surprise. The mold had been in development for many years and has been used in several works. It seems that a prize of this type is more appropriate when an invention begins to emerge, not when so much time has passed. So, once the nomination is confirmed, the joy is very great.

2. In your opinion, what characteristics of this innovation make you worthy of the award?

The advantage of hydraulic resistance that Cubipod provides is very relevant with respect to the cube, which is the most commonly used part in Spain. But there are other parts that also have a lot of hydraulic resistance, although they are expensive to manufacture. The objective of the mold, which has been achieved, is to favour the manufacture of Cubipod so that it is as simple and economical as possible, so that the technical advantage of the piece becomes money.

3. What does it mean to you personally and professionally to be nominated for one of Europe’s most prestigious innovation awards?, what does it bring to the company?

On a personal and professional level it is a fantastic recognition. Considering how difficult it is to be nominated (there are only three nominees in all of Europe in our category), the fact that the European Patent Office considers the development carried out in SATO to be worthy of this award is an endorsement of a way of working that gives me a lot of encouragement for the future.

4. Can you share some anecdote from the mold development process?

Most of the development was carried out in the works that SATO had in the Enlargement of the Port of Alicante. There Fermín was working and, once the first designs were prepared, we analyzed them together and saw some improvements. As a result of the analysis, a prototype model was made, Cubipod was made for the fall tests. And Fermín, who is also a very skillful and detailed person, prepared a model at home with scale plate of the mold, with all the details. He even made some pieces with mortar using the mold. And the came out perfectly!

5. Cubipod arose from the joint work of the Polytechnic University of Valencia and a private company, what has been your experience in this sense?

The experience has been very fruitful. It is a very different field and you learn to value more scientific aspects, going to the source of the knowledge that you then apply in the designs and in the works. It’s very enriching. And as a company and as a user of that knowledge you bring to the University another point of view that helps to properly focus the efforts so that the research brings practical results.

6. What values, attitudes, aptitudes… would you highlight of the human team with which you have worked for the attainment of this achievement?

The first thing I would highlight is the intellectual restlessness. We have always that there are things that can be improved in all aspects of the work. And together with it, the taste for a job well done and collaboration between everyone. No one has a problem helping the person next to them to do their homework if it’s important for everyone. And that has created a team that endures over time, even though some of us no longer work together.

7. Briefly describe how your professional career has developed in the company

Since I joined the company in 1998, my position has been eminently technical. I have been in the SATO Technical Office, first as an engineer in charge and then forming and leading the team that has supported works and tenders since then. In 2015, as a consequence of the incorporation of SATO to OHL, I became part of Technical Management, developing the tasks of service manager, first in maritime works and then in the Civil Works Service, incorporating other disciplines such as hydraulics, topography or tracing of linear works. And for the last six months, I have been responsible for Technical Services and Innovation, coordinating the work of the colleagues in the service.

8. What projects have marked your professional career?, what makes them special?

Being one of the first and the challenge it represented, the LNG terminal project in Bilbao was fundamental for my career, where we carried out all the detailed design and construction of the maritime terminal. Due to its volume and importance, the expansion of the ports of Gijón and Coruña should also be highlighted. They were landmark works in Spain and we have been fortunate enough to participate in both. And all the Cubipod works I have to look at with special affection.

9. Innovation is one of the pillars of OHL, what do you think is its contribution to the smooth running of the business?

Innovation is a reflection of a way of being. A company innovates if it wants to improve the way it does its work. And that effort, which needs to be properly directed and organized in order to bear fruit, leads to a better positioning of the company in the market, both for the improvement in efficiency involved and that which gives us prestige and recognition of the market.

Innovation is a reflection of a way of being. A company innovates if it wants to improve the way it does its work

10. Have you participated in any other RDI development of the company?, which would you highlight?

From my position I have worked on many. Some more in depth than others. I would highlight the block recovery clamp, SATOGrab, because being the first one it made me see the importance of research in constructive aspects to improve performance and results on site. And for having given rise to another patent, I would say the support of the pontoon-caisson system, which we developed to avoid the problems of other support systems.

11. What challenges do you face for the future at a professional level?

12. To conclude, and returning to your nomination, the jury’s decision will be announced on June 20th. Do you have a few words in case you are a winner?

Well, not yet. I have to write down my ideas, to try to avoid the nerves of the moment. And basically, I have to thank the entire team who have worked at SATO over the last few years for this fantastic result, because without them it wouldn’t have been possible.